Second Earth, a “when” rather than “if” question 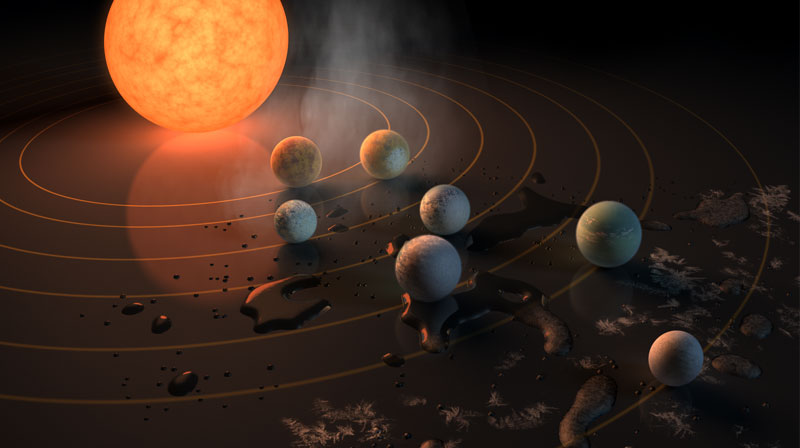 NASA announced today the discovery of the first known system of seven Earth-size planets around a single star. The Spitzer Space Telescope offers now the first realistic opportunity to search for biological signs of alien life outside of our solar system.

Three of these planets are firmly located in the habitable zone, the area around the star where liquid water is most likely to exist.

“This discovery could be a significant piece in the puzzle of finding habitable environments, places that are conducive to life,” said Thomas Zurbuchen, associate administrator of the agency’s Science Mission Directorate in Washington. “Answering the question ‘are we alone’ is a top science priority and finding so many planets like these for the first time in the habitable zone is a remarkable step forward toward that goal.”

“The Trappist-1 planets make the search for life in the galaxy imminent,” added Sara Seager, an astronomer at the Massachusetts Institute of Technology who was not a member of the research team.

At about 40 light-years (235 trillion miles) from Earth, the system of planets is relatively close to us, in the constellation Aquarius. Because they are located outside of our solar system, these planets are scientifically known as exoplanets.

This exoplanet system is called TRAPPIST-1, named for The Transiting Planets and Planetesimals Small Telescope (TRAPPIST) in Chile. In May 2016, researchers using TRAPPIST announced they had discovered three planets in the system. Assisted by several ground-based telescopes, including the European Southern Observatory’s Very Large Telescope, Spitzer confirmed the existence of two of these planets and discovered five additional ones, increasing the number of known planets in the system to seven.