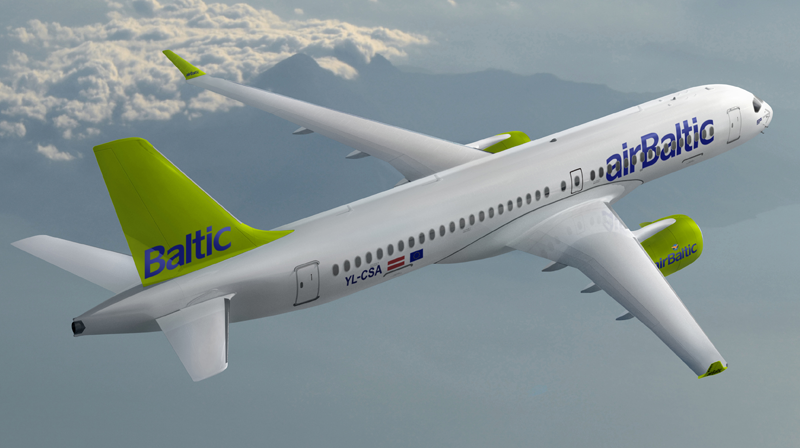 Bombardier Commercial Aircraft announced the delivery of the first CS300 aircraft to launch operator Air Baltic Corporation AS, the flag carrier of Latvia. The CS300 is the larger variant of Bombardier’s all new C Series aircraft, which is designed to carry between 130 and 150 passengers. The handover to airBaltic comes just five months after the successful entry into service of the CS100 variant of the C Series.

“We are thrilled to be taking home the first CS300 aircraft – the newest member of the most innovative and technologically advanced family of airliners in the world,” said Martin Gauss, Chief Executive Officer, airBaltic. “With its longer range capabilities, lower fuel burn and reduced noise emissions compared to other airliners in its segment, the CS300 aircraft will enable airBaltic to open new routes and connect people all across Europe, while offering passengers an unparalleled in-flight experience.

“I would like to congratulate the entire Bombardier team; we are proud to collaborate with you on this great achievement,” added Mr. Gauss.

“We congratulate airBaltic, the first airline in the world to operate the CS300 aircraft, for its forward-thinking vision. We thank them for their partnership and long-standing support and wish them continued success” said Fred Cromer, President, Bombardier Commercial Aircraft. “Wherever the C Series aircraft takes to the skies, it will be an ambassador for Bombardier and a symbol of Canadian innovation and achievement as the most technologically advanced aircraft for the 100- to 150-seat market segment.”

The C Series is the only aircraft optimized for the 100- to 150-seat market segment, which drives the aircraft’s phenomenal economic proposition and performance, opening up new opportunities for single-aisle aircraft operation. The C Series aircraft is manufactured by the C Series Aircraft Limited Partnership, an affiliate of the Bombardier Commercial Aircraft segment of Bombardier Inc.

Comprised of the CS100 and the larger CS300 aircraft, the C Series family represents the fusion of performance and technology. The result is aircraft that deliver unmatched performance and economics in the 100- to 150-seat market segment and an 18 per cent lower cost per passenger, making them the ideal candidates to complement larger single-aisle aircraft. Airlines can now operate routes that were previously not profitable or even possible. An improvement in range in excess of 20 per cent out of hot-and-high airports such as Denver, Mexico City or Lhasa has been confirmed.

Bombardier has created a new standard in cabin design and flexibility to ensure an unrivalled passenger experience. The aircraft’s larger seats, overhead bins and windows deliver a wide body feel that offers passengers unparalleled comfort in a single-aisle cabin.

The CS100 and the CS300 aircraft have over 99 per cent parts commonality as well as Same Type Rating. The groundbreaking Pratt & Whitney PurePower® PW1500G engine, combined with the aircraft’s advanced aerodynamics, delivers reduced fuel burn, noise, and emissions.